Attack the enemy from the ground and sky in online battles, implement your defense strategy to protect your base, build missile defenses, buy new units, become the greatest commander.

In the Commanders War, each commander has a military base that can upgrade its various buildings and use different units such as: modern aircraft, armored tanks and defenses and much more to fight with other players online.

Commanders can attack each other or defend the enemy attacks and get coins and medal, they can choose from a large number of units and upgrade them and use those units in battles.

Commanders can also form alliances with other players and talk to each other and attack each other during civil wars and become the greatest commander in the clan to receive many rewards in addition to showing strength.

Features:
- Online game
- Very low internet data consumption
- Being new and not similar to other games
- Stunning graphics
- Has a lot of forces such as tanks, planes and helicopters
- Battle for supremacy
- View defense system reports in the watchtower
- Ability to take revenge on enemies
- Entering alliances and fight in civil wars
- Conversation with clan members
- Upgrading all kinds of forces and buildings
privacy -
https://www.privacypolicygenerator.org/live.php?token=2QYuAe07iXkeqFPofvapXLC2FUrvDaSG

If you have any suggestions for the game or need support contact us at info@mindsolutionsit.com 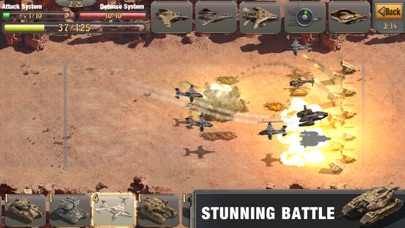